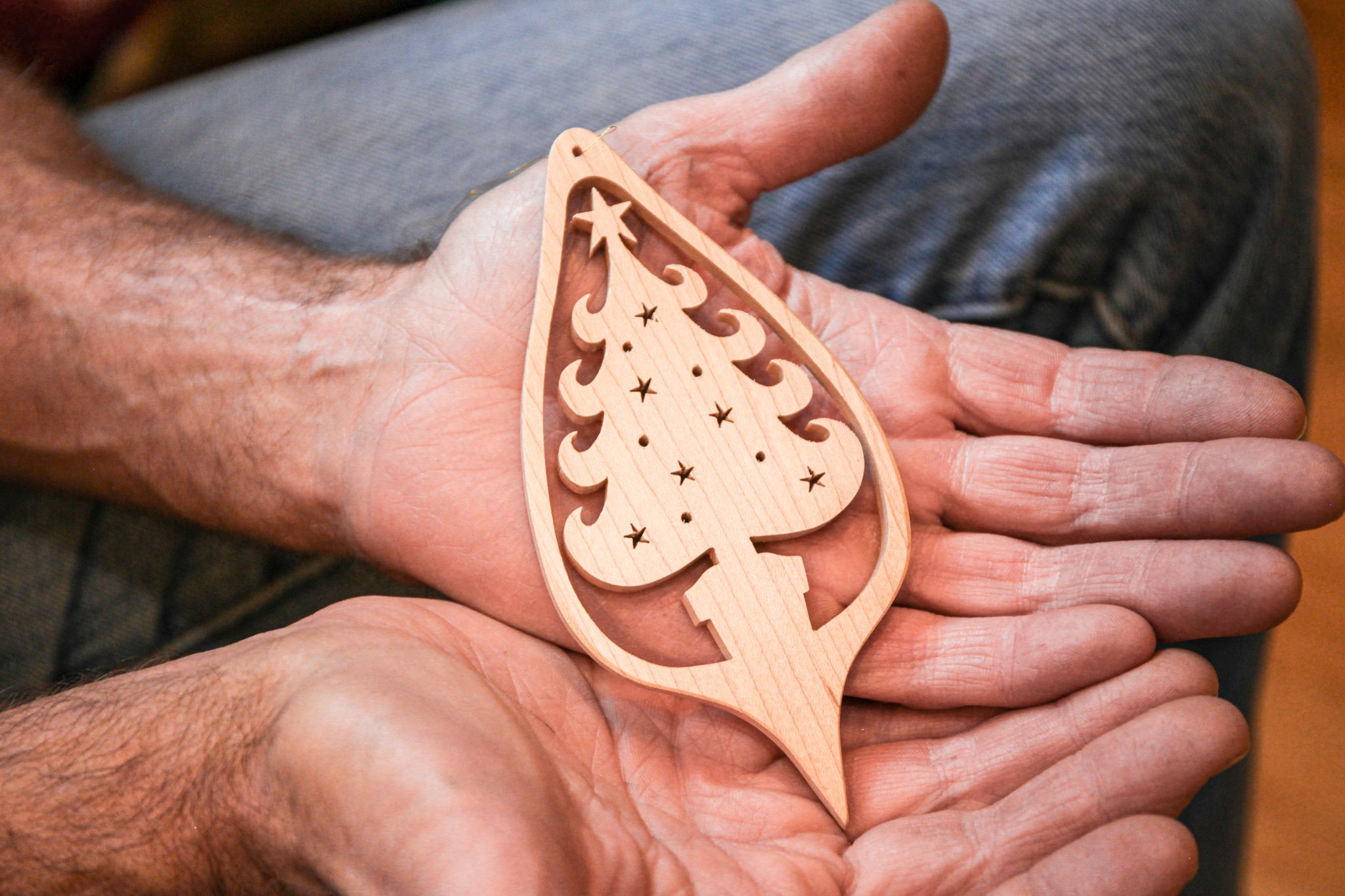 “When I was 20-something, I remember walking around the store in search of gifts for my family for Christmas. As I passed aisles upon aisles of disposable junk, I felt so overwhelmed by all the options around me. No object on a shelf felt meaningful enough for me gift to those I loved. Most of the items, I thought, would end up as burdensome trash stuffed in the attic only to be thrown away the following year.

I wanted to create something that would last a lifetime, and these little wooden ornaments I make do just that. I have no formal background in art, although I do come from an artistic family.

In the beginning, they were very crude and rough-looking because I did them entirely by hand with only a hand saw. As my skills improved, I invested in a power saw, and as time went by, I got better and better.

I create my own designs, trace them over wood, and cut the ornaments from there. Some are made from maple, while others are made from white cedar, the same wood we built our house from. It can be a time-consuming process, and it can get tricky if the design is too complicated. It’s just such a two-dimensional process that boxes me in and limits my creative control.

Years ago, after the first date I had with my now-wife, Prudence, I decided I wanted to make her an ornament as a token of my love. So I gave her a call, and without explanation, asked if she had a nickname. My hope was that people called her ‘Pru,’ because if that was the case, I wouldn’t have to meticulously carve her entire name into an ornament.

Hesitant to tell me because we had only dated once, she said no, she didn't have a nickname. So I worked tirelessly drilling her name into plywood. When I finally finished it and showed her, I think she fell in love. When we think back to that moment, we laugh about it now. Truthfully, it wasn’t a big deal that I had to cut out five extra letters. In a way, she found my extra effort admirable.

At this point in my life, I’ve made thousands of them. Over the years, we’ve shipped them all over the world and gifted many of them to our close friends and family. We donated some to Project Graduation, an initiative at Cape Elizabeth High School that aims to keep students and the community safe on graduation night. We even sold some to LL Bean once, but we could never keep up with volume or demand needed to sustain it full-time.

For the most part, I just make these ornaments for my wife now. I don’t sell them anymore because I just don’t have the time to make them as often as I used to. Each year, we fill our tree with all the ones I’ve gifted her over the years. She’s constantly “borrowing” them from the tree to give to her friends, but I just make new ones to replace those because I love that she's so giving.

Not every ornament I make has significance, although some do. She loves snowflakes, so I make her a unique one each year. We lost our son Josh in an accident, and so I’ve made some ornaments here that depict his love for bicycling and lacrosse. What I appreciate about these ornaments is that no two are the same, because each one is individually made.

My original goal in taking on this endeavor all those years ago was to provide people with gifts they wouldn’t ever want to throw away. Every year, I hope the person who owns one of my ornaments takes it out and fondly remembers who gave it to them.

Whether it be a gift from me or someone else in their life, I want it to bring them happiness and fond memories. There are a few people I know who own one of my ornaments that keep it hung up in their window year-round. To me, that’s a real sign I was successful in what I set out to do.

As we get older, very few people get to see all these ornaments we have up on our tree. The pandemic certainly has impacted that as well. But we’re not trying to sell them, and I’m not trying to make a career out of it at this time. It’s just something Prudence and I are proud of, especially now that the tree feels so full from all the ornaments made in years past.” — Dana Temple, Cape Elizabeth Resident