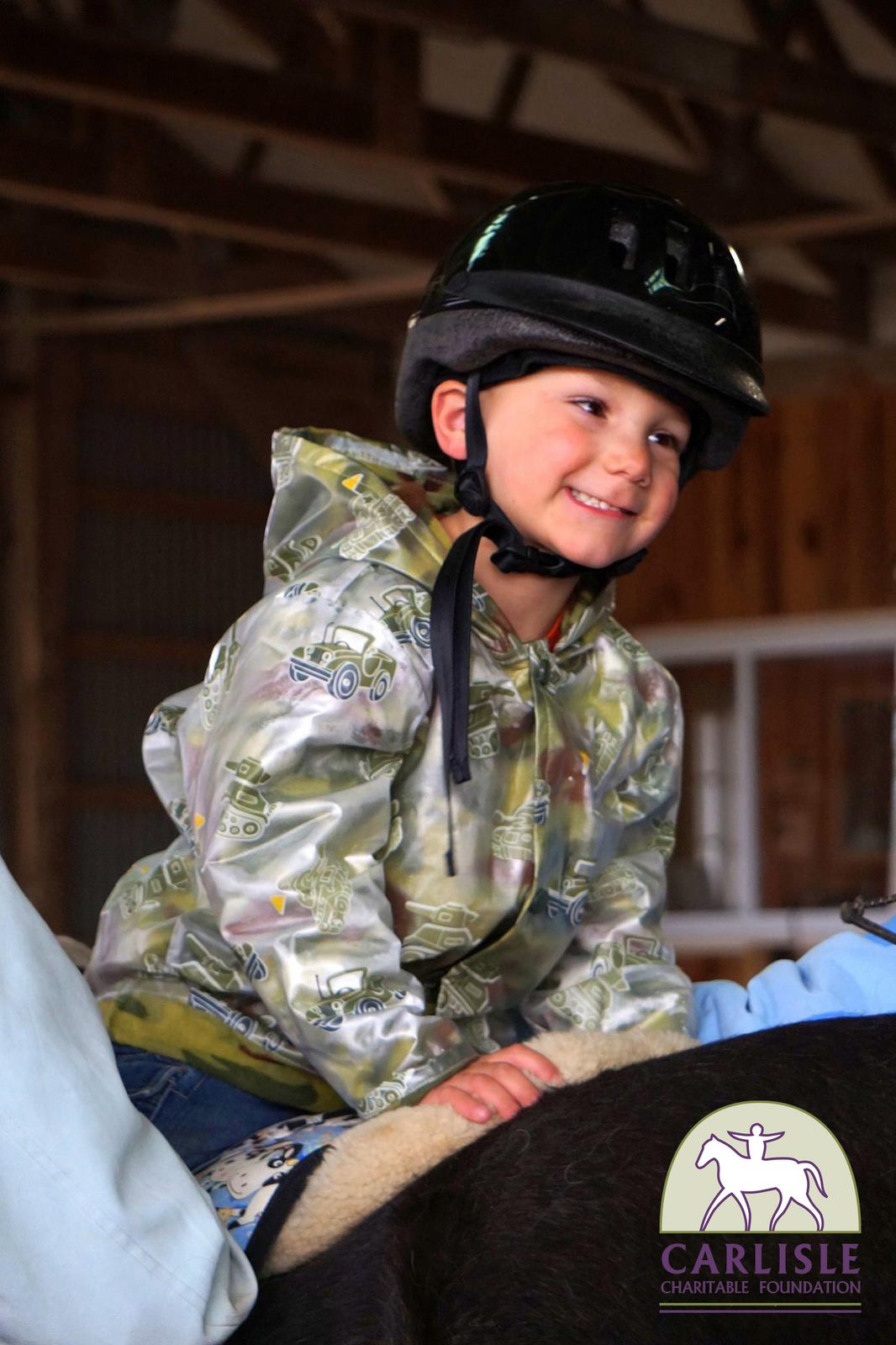 When Eli was just 2.5 years old, he rode a horse for the first time. This milestone marked the beginning of his journey with Carlisle Academy and The Carlisle Charitable Foundation.

At 10 months old, Eli was diagnosed with Quadriplegic Spastic Cerebral Palsy. His mom, Jere said, “because of what Eli was diagnosed with, we were told he wouldn’t have a life. We didn’t accept that.” As Eli started physical therapies, Jere was introduced to The Carlisle Academy through Eli’s physical therapist. The first time he rode, he rode under a scholarship from Dartmouth Children’s hospital and the following year he started with the Carlisle Charitable Foundation. That’s when Eli really started riding, and changing.

In the Fall of Eli’s first full year with Carlisle, he was able to sit up on a horse without support and his speech was improving. When he started at Carlisle, the only world Eli verbalized was ‘yeah;’ different tones meant different things. As he continued his sessions, his speech therapist came out to watch because she could see the changes. Jere said, “I never would’ve thought that riding would help his speech… but it does. He can now form sentences with 8-10 words which is incredible.” Last year, in 1st grade, Eli started making friends with peers. In school, he always tells stories about horses and riding. Even in his writing assignments, which are physically challenging, Eli shares stories about horses.

All of that has been made possible by Eli’s determination and the Carlisle Foundation. Jere said, “while Eli’s had quite the journey with Quadriplegic Spastic Cerebral Palsy, he’s doing all the work. Watching him accomplish tasks and make improvements is so fulfilling for our family. Riding hasn’t just been an activity that Eli participates in and receives therapy. The Carlisle Foundation has truly become a second family. We chat, celebrate birthdays… and other participants have become family. It’s a home away from home. In the 5 years we’ve been attending, Carlisle day is the one day Eli looks forward to because that’s when he gets to see his horse. When we arrive he squeals with excitement, and that never changes.”

Everything changes every day, and Jere’s hope for Eli is that he’s always able to find the enjoyment that horses bring. She says, “his personal goals are up to him; he’s surpassed what I’ve ever expected and what he achieves is because of his efforts. I want to see him happy, healthy and grow. I am amazed that riding a horse has turned into so much more for him. They make it fun for the whole family. My oldest son, Johnny, watches his brother ride and they include him during Eli’s training. Carlisle has provided our family with a community of families just like us. We’ve made a lot of good, close friends. It’s been phenomenal to watch this community succeed!”