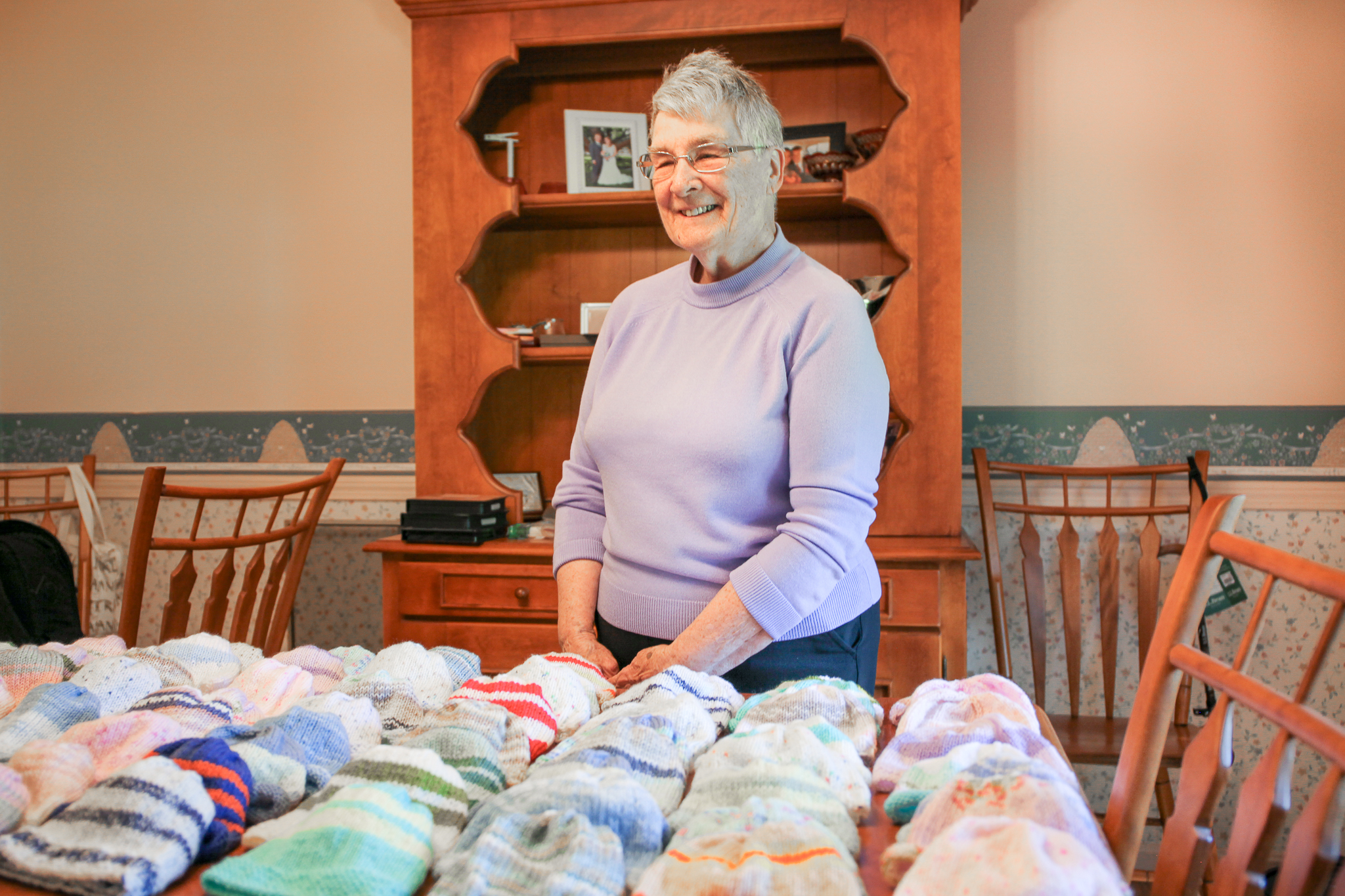 Growing up, my mother used to knit us socks all the time. I treasured them deeply and still have a lot of them today. I didn’t learn to knit until I was retired. My mother, who is now 98 years old, wasn’t able to teach me. So I decided to teach myself.

The desire to knit baby hats probably started as my first-born grandson passed away. He was born premature and had Cystic Fibrosis, a disorder that damages the lungs and digestive tract. He spent a lot of time at the hospital.

I think that's probably where my desire to donate my hats came from as well. I started reaching out to local hospitals to see if they would take my hats, and many showed interest in receiving them.

In the beginning, up until about 3 or 4 years ago, my husband and I were traveling in an RV and I would send the hats back to Maine postmarked from locations all over the country. I really enjoyed making a difference in my local community despite the distance.

I love knitting baby hats because they are so easy and fun to make. Plus, you get a result in a fairly short period of time. Rarely do I make a one color hat; I love to make them colorful and patterned, and no two hats are really alike.

I give hats to Southern Maine Health Care and 12 other hospitals as well. I knit what works for me and then send them out in packages of 24 at a time. In the fall and winter, I also knit about 50 hats and give them to Goodall Memorial Library in Sanford where people can take one if they need one.

I would say I typically knit around 1,100 hats a year, and have done 12,000 in total since I began donating them. For a year or so, I didn’t make any hats and instead made lap robes and gave them away to nursing homes.

One time I brought a stack with me to a nursing home in North Berwick and handed one to a woman being wheeled down the hallway. She hugged that blanket so tight and the biggest smile came across her face. She was so thankful for what I had given her. You don’t forget that feeling.

One of my favorite memories involves my sister, who passed away from cancer in 2005. While she was having therapy, she always felt very cold, so I asked her one day if an afghan would help keep her warm. She said yes, so I decided to crochet one for her.

She loved that thing so much. She would always joke that she had to protect her afghan from other people at the hospital because they were jealous of how beautiful and cozy it was. I decided to crochet a whole stack of them and gave them to my sister to give to her friends.

I didn’t care about taking them to her friends myself because I wanted my sister to experience that feeling of giving back to others that I’d grown so deeply fond of. It was a very special moment for me.

When someone knits, it’s as if they are putting a little bit of themselves into it when they do it by hand. You hope that it’s appreciated, but over the years I’ve learned that when you give something away, what happens to it after is not really a reflection of you.

Some people cherish things and some people don’t. At 78 years old, I’ve learned that you have to let go of anything you give away. I know people do appreciate it though, because I’ve gotten a lot of wonderful feedback through the years. One of my favorite things is to actually see my hats in the wild — what a wonderful and strange feeling it is to have it come full circle like that.