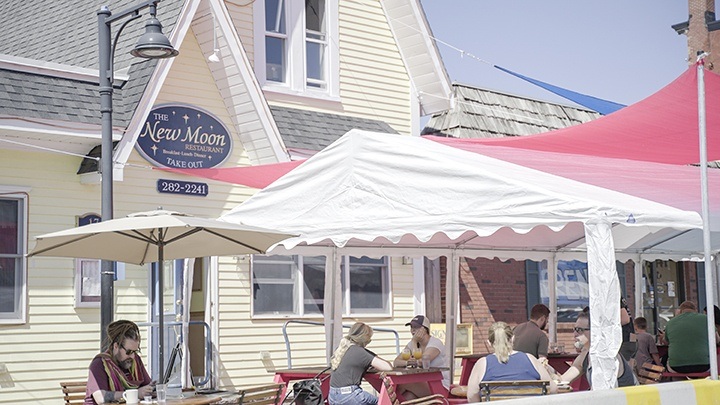 Neil was an architect major. He went to school in Boston, lived and worked there. In order for him to write and submit his thesis, he needed to work in the field. Time wasn’t on his side… It was 2010 and the housing market crashed.

Determined to succeed because failure wasn’t an option, Neil presented in front of the Boston Society of Architects in hopes to secure a clerkship or internship. Unfortunately there wasn’t an opportunity. Slightly defeated, Neil returned home to Maine and had conversations with his Dad. He was feeling like he was stuck, to no fault of his own, and decided it was time to take a break. That’s when the New Moon Cafe building went up for auction.

Neil and his Dad had conversations about investing, and they decided to take a chance and headed to the auction. To their surprise, they were the only that showed. “The negotiation was literally ‘what’s the bottom dollar’ and my Dad and I figured it out from there,” Neil said.

Over the last 8 years, The New Moon Restaurant established regular customers and have been busy serving up delicious meals. They’ve received endless community support, even when the effects of the pandemic hit our communities hard earlier this year. Despite having to close their doors, Neil took advantage of the time and began renovating for when they could re-open. When they finally were able to reveal their renovations and welcome their customers back, they had to close again. The challenges and many disappointments didn’t defeat Neil and his team, though. In fact, it made them stronger. They worked with the Town of Saco to overcome the challenges and got creative.

With the help of the Town of Saco, The New Moon eliminated the parking spaces outside the restaurant in Pepperell Square and filled them with tables undercover so they could continue to provide quality meals for their customers outdoors. “It's not just you, it’s who surrounds you that makes you successful,” Neil said. “I consider my team family and I would not be successful without them.”

Neil and his work family are working through the kinks and Neil is making certain that his teams outside lives are thriving too. He said, “We lift each other up and we support each other. It’s the environment we’ve built here. We’re hopeful for a great summer and we’re excited to see our regulars!”