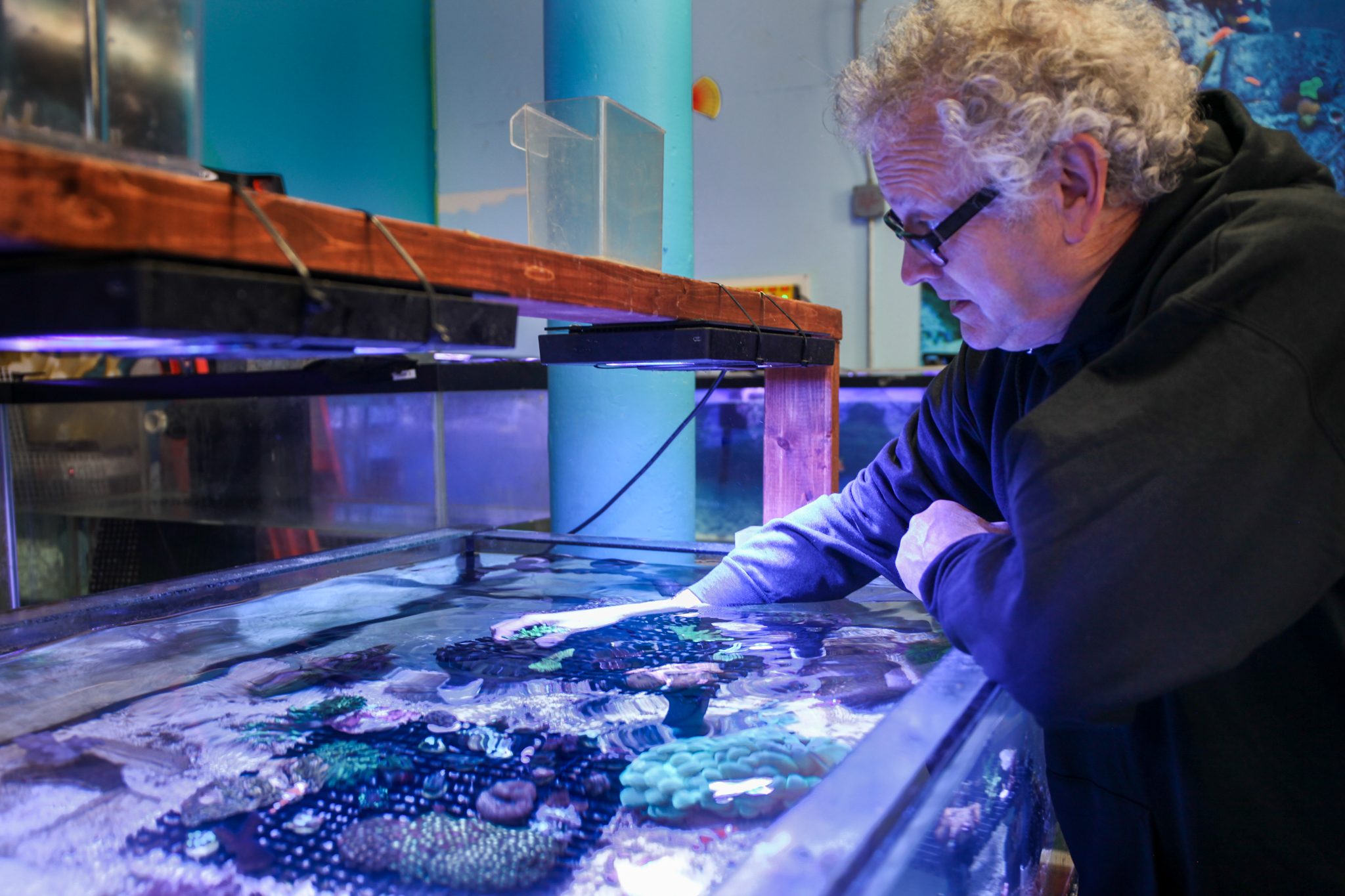 “35 years ago, my wife told me she was pregnant in the lobby of Saco & Biddeford Savings. I was in the middle of maintaining the fish tank and was carrying a bucket of water into the Saco branch. When I heard the news, the bucket fell out of my hand and the water spilled all over the floor. That’s where I was when I found out I was going to be a dad.

I’ve always loved marine animals. The first Christmas present I ever bought my wife was an aquarium, because when I was six years old my father gifted me my first small 10-gallon tank for Christmas too. That childhood memory marks the beginning of what would eventually become a lifetime commitment to learning about and taking care of marine life.

After working in retail management for 11 years, I had come to feel disillusioned by corporate America and wanted something more out of life. I had a friend who loved my tanks and asked if I could put a tank in his office and maintain it. Before I knew it, other people started asking too. So I turned my passion into a career and became an Aquarist.

My company, New England Aquarium Services, designs and maintains aquariums of many sizes at any place or institution. Not only do we place and maintain aquariums, but we breed many types of freshwater or saltwater fish.

We are very much a green company, meaning that we try to get fish that are captive raised if we can —  including the reefs — rather than get them from the wild. Most of the fish not captive raised come in with diseases, so we have to put them in a conditioning tank before they go to our clients. If we put a fish with a disease in a tank it could destroy the whole tank. There’s so much that goes into taking care of a fish tank properly that a lot of people just don’t know about.

I can handle anything; Whether it be guppies, piranhas or a rare angelfish from the red sea, I know what it takes to keep those animals happy, healthy and alive. Plus, I deeply enjoy the work I do. When I’m here, hours and hours slip by and I don’t even realize it. That’s how I know I’m doing something I love.

I had to do a lot of this on my own and very much of what I’ve learned over the years is entirely self-taught. When I was younger, there was no such thing as an Aquarium Science Degree. All this stuff I had to learn on my own by going to conferences and designing it myself. If I wanted something for my tanks that didn’t exist online or in stores, I would just build it myself.

I’ve lectured coast to coast on coast on Aquarium Science. In this career field, I need to be able to walk into any situation and understand how to fix it. I like to say that there isn’t a screw up someone can make that I haven’t made myself, because that’s the only way to truly learn.

Not only are tanks a beautiful addition to a room, but they also act as a tool. You can use them for educational and therapeutic purposes. We offer Aquatic Relief Therapy and bring in small, sterile enclosed tanks to children in local hospitals undergoing treatment. Their eyes just light up and you can see their stress melt away. It’s a special feeling knowing you can give your passion to others and positively impact their lives.

Besides being a business owner, I’m also an adjunct professor teaching Aquarium Science at the University of New England. I have a lot of students that come here to learn what it takes to work in this specialized field. These are kids who have the passion I do and followed through with their dreams.

We’re just a very close, tight-knit company. Each employee has a passion project of their own that they see each day. One student is growing mangroves, while another is breeding sea slugs. It adds a layer of fun to the job and allows them to explore their own curiosities.

I feel so lucky to have such an incredible team of dedicated individuals working here with me. The truth is, we don’t make a lot of money, but it’s such a cool job. If you have it in your heart to do this type of thing, you’ll never work a day in your life. It feels like I haven’t worked in 40 years.”

Rick Oellers attended the University of Southern Maine and formed New England Aquarium Services, Inc. in 198. He founded the Maine State Aquarist Society in 1991 and opened a premier aquarium store that same year, with the intention of teaching hobbyist responsible aquarium husbandry. He later began work as the chief aquarist at the Science & Nature center in Seabrook, New Hampshire, a position he still holds today.

Rick was a founder of the American Marinelife Dealers Association (AMDA), serving as president from 1997 to 2001. He taught aquarium husbandry at the University of New England where he became an adjunct scientist in 2008 and is currently an advisor to the ornamental marine fish and breeding project in the Marine Science department. He is an experienced diver and has worked recently surveying and studying lionfish behavior in the Caribbean.