Take time to celebrate your accomplishments but more importantly the failures. 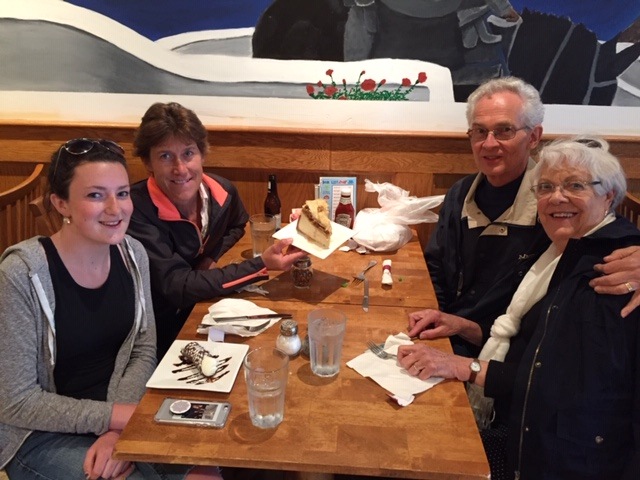 David Howe is the father of Lara Howe Favreau - nothing changes that. David, an impeccably dressed, intelligent, cautious, dedicated businessman took great pride in his family, and gave back to his community. He was financially savvy and very interested in technology. He spent his working years as the administrator of Ocean Pines and Pine Woods, contributing to helping seniors age with dignity. He also thought it was important to volunteer. He shared his time with Ronald McDonald House, Meals on Wheels and served as a board member of Saco & Biddeford Savings. His job and volunteer work were demanding so he’d always planned to retire early and enjoy life, and his family is thrilled he did. Sadly, soon after retiring, David started to show early signs of dementia, a true devastation to all who love him.

Lara, always looked up to, and sought out the advice of her father. She recalled his intense interest in computers and remembered when he brought home one of the first computers, the Commodore 64 about 35 years ago. “He was right into the world wide web,” said Lara. "In spite of that, when he retired he still had a flip phone, so I thought it would be great to get him a real phone, an iPhone, and give him lessons on how to use it.” She would go over to his house every week for dinner and give him lessons. That’s when Lara noticed small signs.

Skills that were pretty easy, David wasn’t grasping, and as more time went by Lara noticed his mind had become so weak it was no longer possible for him to stay home because he was a danger to himself and to others. “He would leave the milk in the dishwasher amongst other things. It was painful and difficult, but his wife Sally, my brother Chris and I decided it was best to move my Dad into a home where he could receive the care he deserved.”

David just turned 75 years young, with a healthy body despite a failing mind. Lara and her brother Chris were their fathers “two greatest projects.” Lara learned a lot from her Dad. When she and her brother were growing up, David taught them a wonderful financial sense - you don’t have to earn a lot of money to be well off, you have to know what you have so you can spend wisely within your means. “Even as he got sick,” Lara said, “he always had a pen and paper in the pocket of his dress shirt so he could take notes about anything going on. It was important to carry a wallet when he moved into the home, which is against the rules. He told me multiple times, 'Lara $5 dollars is just not enough.' Even with a declining mind, he knew the strength of a dollar. He taught me a lot about stocks and bonds, and financial well-being as well as the ability to communicate clearly through writing skills. But the most important skill out of school he taught me, was to be a life long student, learning from each situation. Take time to celebrate your accomplishments but more importantly the failures, as the lesson is greater than the result - a lifelong skill I cherish."

Watching someone you idolize who carried himself with kindness, heart and intelligence - a man who was full of life, and loved to learn - turn into the exact opposite has been hard for Lara. He’s had aggressive outbreaks and his ability to learn and communicate is almost non-existent. David was always so proud of his appearance, he wore dress shirts daily, and the disease has made him into someone he would never, ever, want to be. “I feel like I’ve already lost him, as he is no longer able to do what he always did best which was to worry about me and do what he could to protect me,” Lara said. Davids verbal skills have declined dramatically but he still recognizes faces and knows somehow there is a meaningful connection with those faces. Despite almost non-existent verbal skills, each conversation is clearly ended with I love you!

Lara finds solace in knowing her Dad lived an incredible life and he will leave a legacy that even dementia can’t take away.