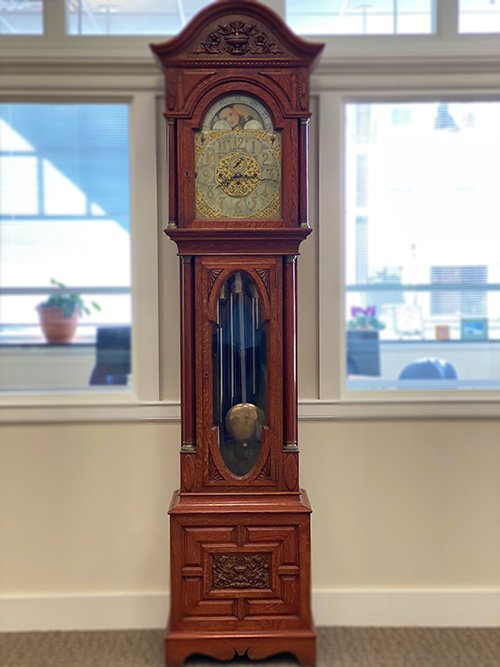 Mark B. Black. He’s described by his great nephew, John Black, as a tall, bald, imposing figure of a man. He served on the board at SBSI in the 1940’s and 50’s.

Mark came to the United States by boat from Scotland as a young man with his father. Both Mark and his father located places to live and jobs in the mills before returning to Scotland to bring the rest of their family to the U.S.

In 1949, Mark was one of 28 students to graduate from the Saco-Lowell Shops Apprentice School as a service manager, and he went on to be a top executive. Mark’s sister, Catherine Neilson, owned the flower shop that sat on the corner of Thornton Street in Saco, and shared that Mark had gifted that bank one of his clocks from his collection.

Mark was a collector of clocks, he had a house full of them. His great nephew John was only 10 years old when he died but he said, “I have a vague recollection of a house filled with clocks, and I remember the look on my Great Uncle’s face if I had been the one to make them all go off.” When Mark served on the board, he gave a beautiful clock to the bank as a gift. The clock now stands in the lobby of the Main Office in Saco.

The rest of Mark’s clocks now live with members of the family, but every time John enters the SBSI lobby, he admires the clock and recalls the memories he shared with his Great Uncle.

Details from the clock’s plaque: This clock was restored to its present condition by Father & Son Clockworks of Springvale, Maine. Bawo & Dotter, Limited, of New York, manufactured this Westminster Chiming Tall Clock, Model “Elite” Westminster Chiming on December 4, 1990.This quality movement boasts the normal quarter-hour chiming and striking pattern we all enjoy, but it has the added feature of being able to repeat the hour strike on the half hour.

The “Elite” movement is a high quality German chiming movement built in heavy brass plates. The pinions are cut from solid steel and the wheels of hard polished brass. The high grade of workmanship and construction ensures perfect time, correct striking and chiming. It has a three-train work with three weights. It has two racks ensuring correct striking and chiming, two outside regulating flies, brass covered weights and pendulum bob, gilt lines and pulleys. This movement has the superior Graham escapement, maintaining power, put on-bear attachment, polished blue steel serpentine hands and second hand, and beats the second. The pendulum has a metal rod. The 1.250 inch tubular bells furnished with this movement are perfect.