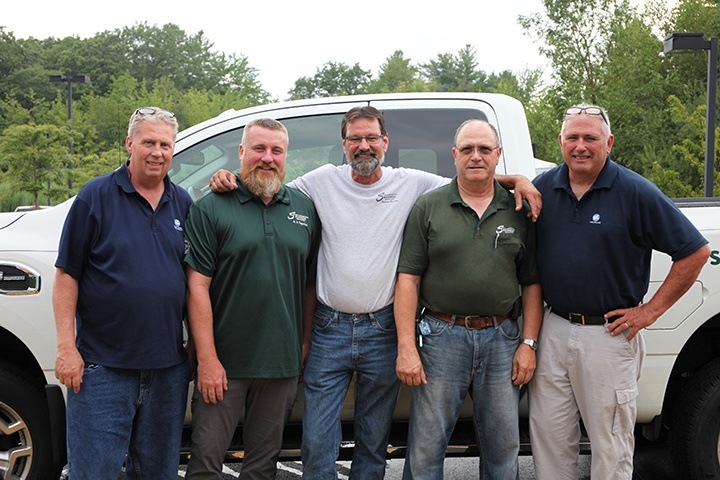 Our appreciation and gratitude is immense for our Facilities team at SBSI. They go above and beyond to make sure we are safe and happy. We recently experienced some unfortunate incidents, and our team's efforts displayed commitment, dedication and loyalty.

It was 4:00AM when the call was received confirming a car had crashed into the transformer outside of our operations center. Facilities and Security Manager Lou McAuliffe was first on the scene to assist police, as he previously worked for the Saco PD reconstructing vehicle crashes. He pulled security camera footage to determine the exact time of the accident. Lou Belanger, Senior Facilities Technician, secured the parking lot with police tape to coordinate with CMP crews, and reached out to our electrician and the oil company since we would be running on a generator. After restoring the operations center, the team was hit with another incident just a week later.

Once again at 4:00AM, Lou McAuliffe was notified that the water alarms had been triggered at our Old Orchard Beach branch. Severe rain caused a major roof leak during the night. Lou answered the call and was on site immediately. Water had leaked through the roof, soaked the insulation, and caused 40 ceiling tiles to fall to the floor. Lou made the call and his team showed up to start the cleaning process, since the bank needed to be open for July 4th week. The team called ServPro to assist, and they arrived within an hour with fans and humidifiers. The water had leaked all the way from the attic to the basement and as a result, our network server was affected and systems were down. Jeff Roberts, our Director of Information Technology, didn’t hesitate when he received the early morning phone call and began diagnosing the problem with Joe Valente and Brett Cragg. Lou McAullife called the roofing contractor to patch the roof and once the lobby was dry Dana Jewett and Rick Bourque, Facilities Technicians, located and matched the ceiling tiles and reinstalled them.

Due to our Facilities and Network Operations teams quick action and hard work, we went from two total messes to being fully functional for a busy holiday week.

With heartfelt gratitude, we thank our team for embodying what it means to be In It Together!