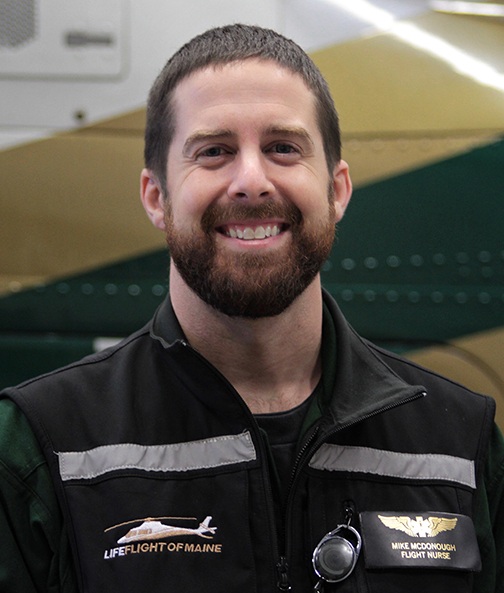 “When LifeFlight crews came in I witnessed them take complex patients and take care of them… to say it was impressive is an understatement. Their abilities, demeanor and professionalism made me realize that’s exactly what I wanted to do and where I wanted to be.”

Mike McDonough has been with LifeFlight for three years. He grew up in Maine and pursued an education in nursing. He graduated from the University of Southern Maine with a Bachelor's Degree of Science in Nursing and became an RN. His career before joining LifeFlight brought him away from home as he enjoyed travel assignments in Washington D.C. and San Diego California. But, as the saying goes, home is where the heart is (and 4 generations of family) so Mike returned to Maine as he always knew he would.

Working in the Emergency Department in Augusta upon his return to Maine was where Mike first saw LifeFlight. He said, “Whenever the LifeFlight crews came in and I witnessed them take complex patients and take care of them… to say it was impressive is an understatement. Their abilities, demeanor and professionalism made me realize that’s exactly what I wanted to do and where I wanted to be.” Mike put his nose to the grindstone and began doing everything he could to push himself to gain enough experience to achieve his dream.

Mike started a job in a post open heart operation ICU, which required the skillset to manage and maintain multiple machines that were helping to keep patients alive after surgery. He split his time between the ICU and the Emergency Department. After he felt confident with his skills and abilities, Mike sent in his application to LifeFlight. From his first email, it took about a year before he was hired and he said, “I knew it wasn’t going to be a fast process because they want people with experience. I’ve been with the team at LifeFlight for 3.5 years now and plan to continue until I am physically unable.”

Managing complex situations is something that LifeFlight teaches; breaking down a challenge into workable steps. Mike and the entire LifeFlight team receive a lot of training, and he mentioned it’s important for each of them to remember that they can only do so many things at once. In whatever situation they're in, it’s critical to identify what the absolute first priority is and then get to work. “When you address things in the right order,” he said, “and you use your equipment when it’s time to use it, you take solace in knowing you followed your algorithms and the person you’re treating got the best shot that anyone could have given them.”

The most rewarding part of the job for Mike is being in a position where he can see first-hand the results of the efforts he and his team perform. However, for every reward there’s usually a challenge and Mike said, “we are put into some really tough situations - for every outcome that is incredible, there's another that we weren't able to affect despite our efforts.”

There are many layers of complexity and many hands involved in providing care in the back of the helicopter or fixed wing airplane. Mike says, “I appreciate everyone that supports us - a lot of work goes into helping us operate successfully.” Mike is looking forward to continuing his work with the LifeFlight crew in the years to come. “It’s an incredible group of providers dedicated to taking care of Maine.,” he said, “and I feel lucky to be counted as one of them! I can’t wait for more!”