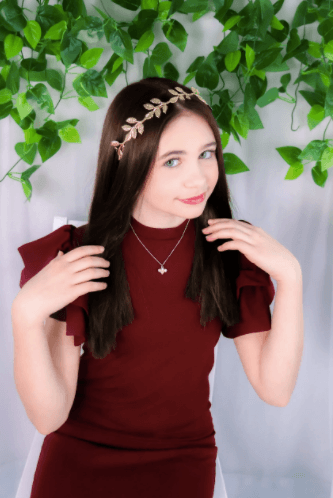 Maddison Thayer was crowned Miss Southern Maine Preteen on January 25th, 2020. After she won the title, she was inspired to create an organization that would initiate change and evoke kindness in all. She was knowledgeable about bees: their impact on the environment, and their importance to our ecosystems. Maddie quickly made the connection that kids are like bees, and they need to be kind so the world can thrive.

Kindness was never more present than in May of 2017, when Maddie had an accident which brought her to the Shriners Hospital. She said, “I felt like they were only focused on me, and I was the biggest concern for them. They gave me 100% of their attention and showed me so much kindness. They helped me so much that I wanted to start an organization where I could carry on the kindness that was shown to me.”

Maddie recognized bullying was a problem in schools and that she had the opportunity to create a platform to end bullying. She knew that her biggest obstacle was going to be showing kids that they are the future of ending bullying, and kindness is the way to do that. She knew she had to work hard to change the mindset of the bullies and the “queen bees” in schools. Queen bees are anti-bullying peer activists in schools. When Maddie sat down with her Memere, Brenda, she asked her, “What do you want to do?” Maddie provided 3 answers: Be Kind, Be Brave and Be the Change. That became the platform for her non-profit organization, Brave Bees.

On April 23rd, 2020, BraveBees.org received an official stamp of approval! Maddie said, “At first I didn’t really think that it meant anything but I realized not everyone is allowed to be official, you can only be official if you have a good foundation. Once I recognized that, it was really exciting!” Maddie worked with her Mom and Memere to launch a website and a blog where she creates and publishes her own content. She’s also been working on bringing the Brave Bees platform to her school. Before the coronavirus, Maddie pitched her idea of Brave Bees and Kind Colonies to her Principal and Vice Principal. They were ecstatic to start the incredible program with staff who support and encourage safe paths for conversation.

Right now, Maddie is working hard planning to set up something called The Hive on her website: bee inspired jewelry which will promote Brave Bees and provide the Queen Bees with Brave Bee materials for their colonies. The website will also feature all of the Queen Bees and Brave Bee Colonies that are started. Maddie is also collecting can tabs, which are donated to the Shriners hospital. They bring the tabs to recycling centers and those funds are used to alleviate travel and hotel expenses for families in their hospitals. Maddie has collected over 200,000 so far. She looks forward to going out to businesses with collection bins as they reopen so she can support the Shriners and repay the kindness she was shown.