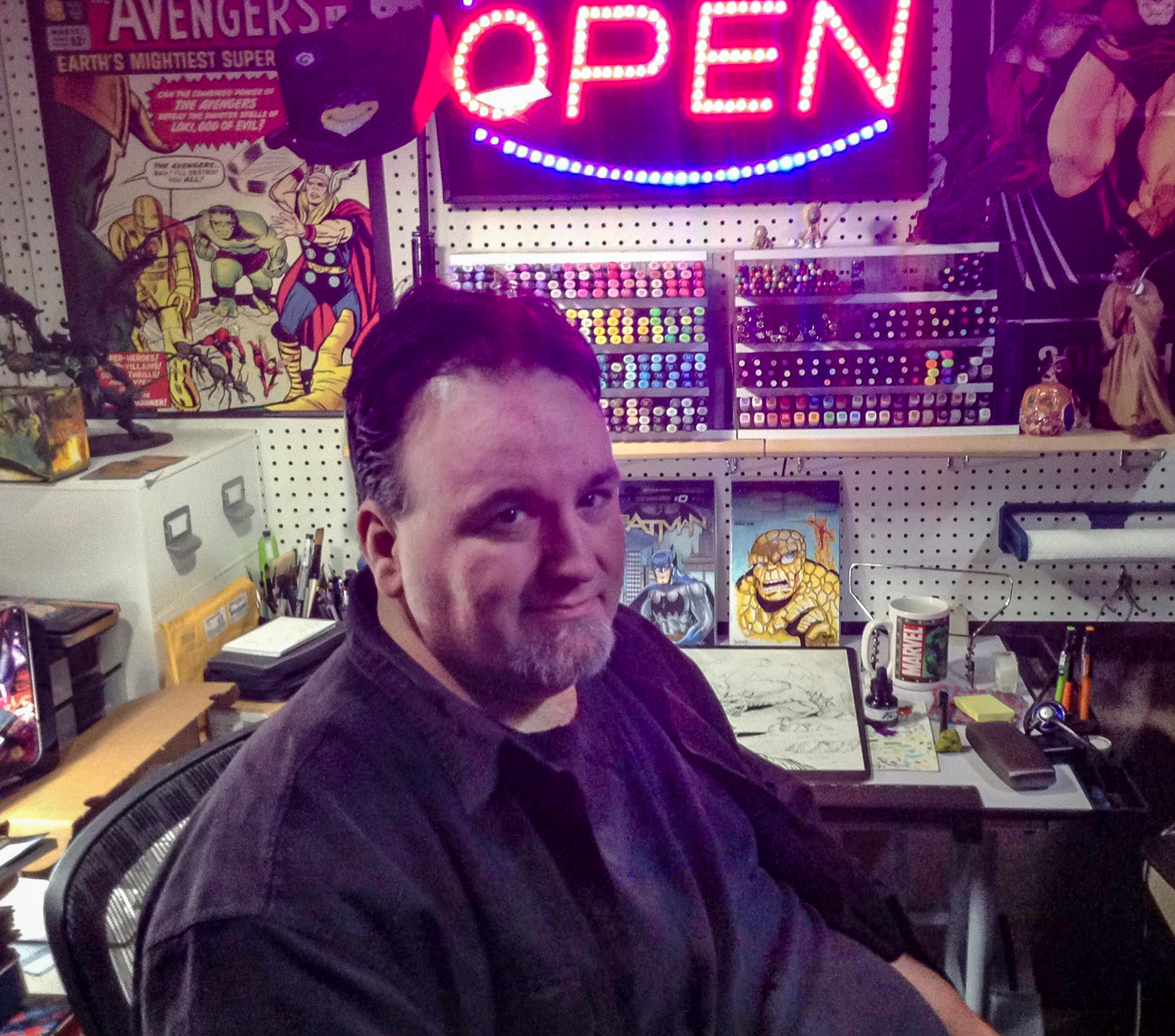 I’ve been collecting comic books since I was about 10 years old, and in the 1990’s I went to college for special effects make-up and movie special effects. So I’ve always been a fan of art and creating characters.

My dad was always doing computer stuff and systems, and I ended up falling in love with that as well. When I got out of college, I worked for the Navy as well as making animations for the in-house advertising department at Foxwoods Casino in Connecticut.

Eventually, I lost my job due to employee layoffs, so I started messing around with computer animations and making comic book characters. The software at that time was getting to the point where you could make people, animate them and pose them.

At the time, I was posting my work to a website dedicated to 3D art. It was kind of like an artist forum where you could share content and others could see it. I ended up receiving an email from a gentleman who worked for larger companies who just happened to be on the same website. He told me he was impressed by my work, and sent a copy of an idea he was working on and asked me to draw something up.

It all felt like I had just been in the right place at the right time. I ended up completing his assignment in 12 hours and he seemed surprised I had gotten it done so quickly. Long story short, we ended up creating and releasing some of the first digital comic books ever, and that was a really rewarding and unique experience.

Since then, I’ve worked for every major company out there making anything from posters to comics to trading card art. I’ve done work for Marvel, DC comics, the Walking Dead, The Avengers, Thor, Captain America, and other independent works such as Red Sonya and the movie Kick-Ass.

Networking was so huge for my career success. Sometimes it just felt like blind luck, as if the little stepping stone after each project just kept getting bigger and bigger.

After my father passed away, I didn’t have anyone to fix, repair or upgrade my computer, which I relied on for doing digital work. Plus, I had so many people asking me if I had original pieces for sale, but with digital art, everything is done on the computer and printed off. So in 2003, I picked up a pencil again and have done traditional artwork with pen, pencil and paint ever since.

I’m currently working on my own book called “Fear University.” I’ve always been a big fan of old horror movies and monster movies, so it felt like a no-brainer for me to do my own comic series that features monsters inspired by Frankenstein, Dracula and an array of modern-day Halloween movies. I like satire as well, so I try to incorporate elements of comedic horror into my work as often as possible.

My advice to anyone who is looking to be an artist for a living is to just do it. Don’t just talk about doing it. Sit down and commit yourself and do the work even on days you don’t necessarily feel like it.

I have a sketchbook I carry with me at all times. I rarely ever forget it. Wherever I go, and my wife can attest to this, I’ll sit and draw. Some people sit on their phones, but I like to get in that practice whenever I’m able to.