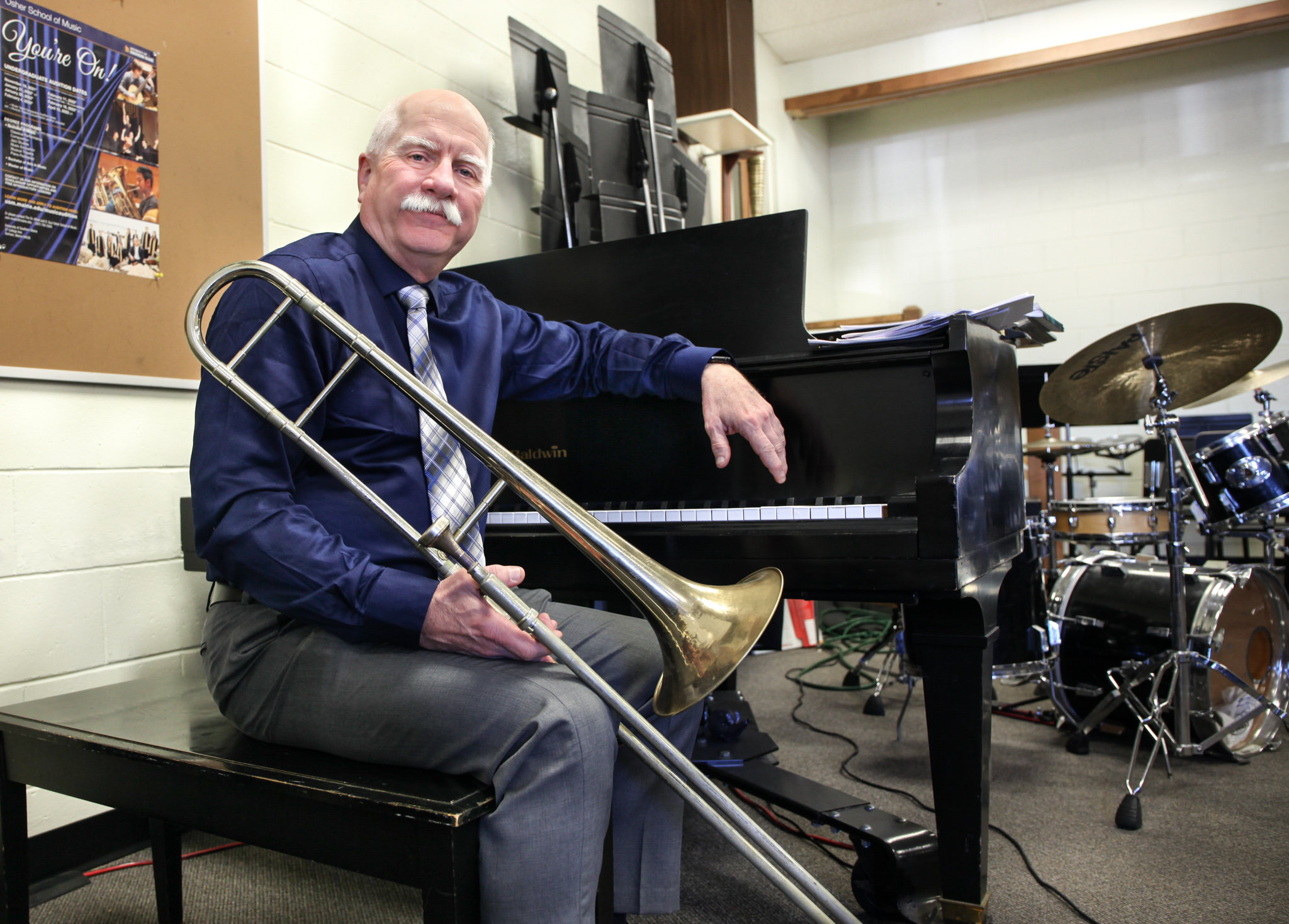 When a person plays music, their entire brain fires up. There is no other activity that humans do where this happens, and it’s important to understand how valuable that is to everyone's life.

My interest in music started as young as I could talk. I began singing when I was three years old and I started out as a piano player when I was six. I didn’t stick with that instrument because my hand coordination is not very advanced and I didn’t like having to practice in a solitary fashion. I'm more of a team sports player. I wanted to be in a band and play with other people.

My dad was a career Naval Officer and a trombone player. His instrument was always around the house, and I remember he would play trombone recordings. In a way, it feels like that instrument chose me. I’ve been playing trombone for over 55 years now.

When an opening for a Music Director at Old Orchard Beach High School became available, my best friend was the athletic director and told me I should really consider applying.

I wasn't sure at first, but it ended up being a great decision and completes the cycle of my career. I’ve had a lot of teachers in my family that have worked at this very school system from as far back as 1935, and I have a lot of musicians in my family as well.

As the only one in the music department, it is my job to help these students understand the technicalities associated with every aspect of music. I teach concert band, chorus, jazz ensembles, marching band, music of the cinema, theory classes, music masterworks, and generally anything that has to do with music.

It’s important that people understand the reason they’re playing music. Music is a way of communicating something. You don’t want to be spewing out notes and rhythms without purpose. The goal is to send the meaning of the sound to connect with people and to play with passion. These are some of the things I teach my students.

Over the years, I’ve worked hard to ensure they know how to read  music very well. I’ve seen a lot of people in other situations who have gone through four years of High School without ever having learned sight reading, so when they graduate they tend to discontinue playing.

It’s critically important that these kids develop the ability to self-teach so they can use music for their whole lives and not just put their instrument in the closet and never touch it again.

I love to see the satisfaction students feel when they do well. Over time, my students begin to  feel more like colleagues than my students. I’m the one teaching them, but after years of practice they become incredibly talented at what they do.

Seeing each student grow and advance in their learning has been a really rewarding part of my career. We’ve had a lot of success and won awards and trophies, but the most important thing for me has been the lasting effect that music has on these kids.

When I retire in June, I’m going to miss teaching students, but I’m also going to be so busy I’m going to wonder how I had time to work. Until I can’t any longer, I’m going to continue to play as much as possible. My wife is a private piano teacher, and she plans to keep teaching.

We have several properties to manage and we own a music publishing company we still intend to manage. It's small but viable. We also have a ten month old grandson we want to spend lots of time with, and we plan to travel a lot. So there is a lot to keep me occupied!

There isn’t currently anyone lined up to fill this open position, but my advice to the next Music Director is to know your community. Nobody can do this job themselves, so having the community backing our program is critical.

Being the Music Director gave me the ability to give back to a community that had given so much to me and I’m forever grateful to have been given this opportunity. After 22 years of teaching here, and 43 years of teaching in general, I’d say I’ve had a pretty good run.